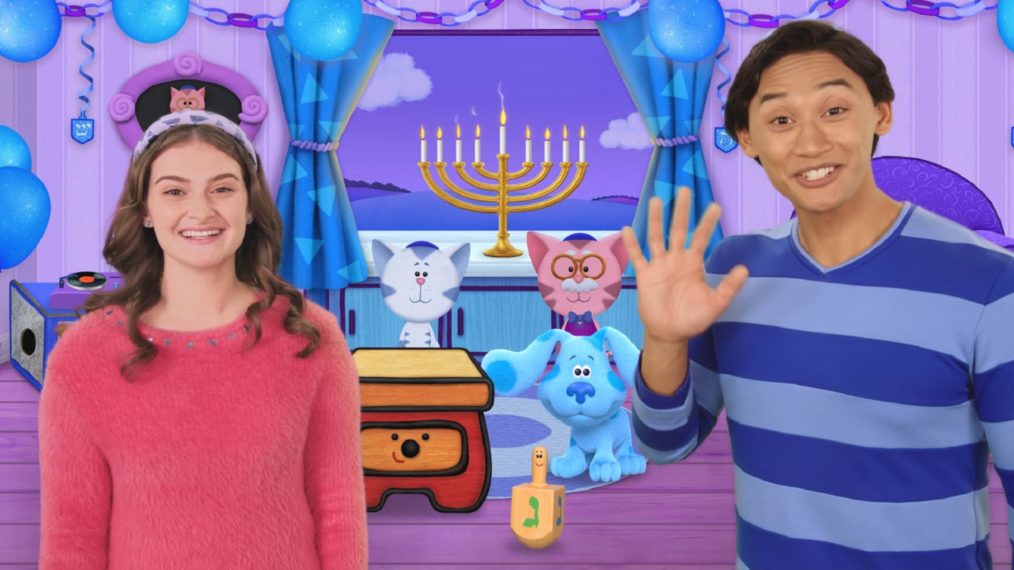 Still celebrating its 25th anniversary year, Blue’s Clues is gearing up for the holiday season with its rebooted spinoff Blue’s Clues & You!.

Kicking off this month, the show rings in the season with the launch of its all-new Chanukah-themed episode, “A Blue’s Clues Festival of Lights,” on Friday, November 26 (12 p.m. ET/PT). This is just the beginning as Nickelodeon expands its partnership with the nonprofit organization Save the Children for the network’s second annual “Blue Friday” on November 19. In Blue’s Clues & You! “A Blue’s Clue’s Festival of Lights” (teased in a clip, above), a special guest comes to Periwinkle’s house to celebrate Chanukah. Josh (Josh Dela Cruz) and Blue play Blue’s Clues to figure out who the surprise guest is, and celebrate the holiday by spinning dreidels, frying latkes, and singing an original song. The special joins Nickelodeon’s library of holiday episodes that include favorites like Rugrats, “A Rugrats Chanukah” and SpongeBob SquarePants‘ “It’s A SpongeBob Christmas!” “Blue Friday” is a day of giving and learning that provides children in need with new opportunities and educational materials. Save the Children is a national leader in helping children prepare and succeed in school across rural America. Through Blue’s Clues & You, the nonprofit offers kids tools through the educational hub cluedintolearning.com where parents can access learning materials, math and science curriculum videos, Blue’s Clues & You! activity sheets, and more.

Blue’s Clues & You! is also slated to return to this year’s 95th Annual Macy’s Thanksgiving Day Parade in New York City on Thursday, November 25. Series star Josh Dela Cruz and former Blue’s Clues hosts Donovan Patton and Steve Burns will perform “You Can’t Spell Blue without YOU” on the float alongside a 22-foot-tall Blue.

In case you miss “A Blue’s Clues Festival of Lights,” the episode will be available to watch on Nick Jr. On Demand, NickJr.com, and the Nick Jr. App. The installment is part of Nickelodeon’s “Nickmas” holiday lineup that features premieres and specials from shows like Danger Force, That Girl Lay Lay, Baby Shark’s Big Show!, and more. Don’t miss the events, catch the Chanukah special, get involved with “Blue Friday,” and keep an eye out for Blue’s Clues at the Macy’s Thanksgiving Day Parade.

Chief of War: Justin Chon to Direct Jason Momoa in

New technique shows in detail where drug molecules hit their

Why We Must Protect Voting Rights

Is Bitcoin Legal in India or Not? Supreme Court Asks