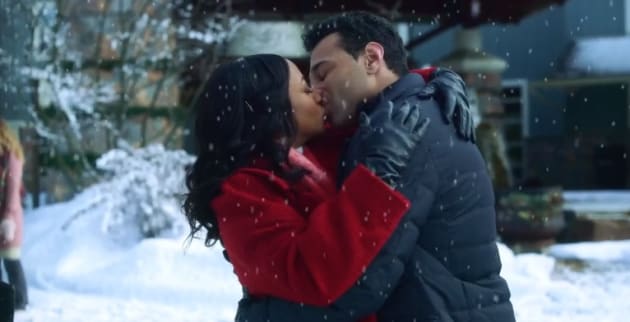 Wow, can we have Corbin Bleu and Monique Coleman star in all the things?

Mere seconds into A Christmas Dance Reunion, and a girl is already plotting for the pair to become staples for Lifetime’s holiday movies.

As any High School Musical fan knows, the chemistry between these two is electric. A Christmas Dance Reunion only showed that not only can’t you manufacture that type of spark between costars in anything, but it never extinguishes.

Seriously, Bleu and Coleman could reunite a dozen times over, playing totally different characters in a new film every holiday season, and we’ll fall in love with their onscreen love.

If someone is willing to make that happen, they’ll be as revered as Santa himself.

From the second Lucy and Barrett locked eyes, the longing and romantic tension between the pair were palpable.

Oh yes, that’s how you serve us romantic cinema, people! The most seemingly innocent exchanges between the two were enough to have you feel as if you were intruding on these lovebirds.

As chaste and PG-rated as their scenes were, it felt borderline indecent whenever they had their stolen moments of pregnant pauses, hitched breaths, and more.

And yet, it was wholesome, too. Coleman and Bleu understood the assignment and delivered, and while the movie was as sweet as could be, I only wish the actual story around its leads was stronger.

Barrett managed to lure his teen crush and dance partner to the Winterleigh Resort for what he thought was one final time.

He probably figured it was a longshot, but fortunately, Lucy’s fond memories of the place, especially since her father passed away, were enough to draw her and her mother there for a final farewell.

It wouldn’t be a holiday film unless the leads must join forces to save some delightful small business that’s meaningful to the community and invokes joy in everyone who has the pleasure of patronizing the place.

The Winterleigh Resort was on its last legs, but thanks to some Christmas magic and Lucy and Barrett’s hard work, they appealed to all those who loved the place and visited over the years.

And Marlee’s news special that put eyes on their efforts was the clencher, too.

Just when Barrett and his uncle, Hank, lost all hope and were resigned to the fact that they would be saying goodbye to this beloved place forever, there was a miracle at the Christmas dance.

All Winterleigh needed was Lucy lighting up the place and bringing back some of the events that were staples for the resort and lured families from all around.

The series of events that Lucy and Barrett put on, bringing back all of the nostalgic experiences from childhood, was adorable and effective.

It was particularly precious to see how little Posie responded to everything.

She was such an excitable child and cute as a freaking button. You wanted to just reach through the screen and squeeze her cheeks, and her toothless smile elicited one in viewers.

The festivities had the perfect amount of holiday vibes to sell it, and there were enough people around to spark the holiday spirit.

But it was the Christmas Dance that was the crowd-pleaser.

You can’t have either of these stars in a holiday film like this without incorporating dance into the equation, and it’s precisely what we signed up for when we kicked things off with Barrett’s smooth and effortlessly cool tap dance number.

And can we take a moment to appreciate how hot Barrett looked in his suspenders and hat?

But it was Barrett and Lucy’s ability to naturally fall into step with one another that cemented their chemistry and that they were made for one another.

Despite years of not dancing, especially with one another, Lucy held her own alongside Barrett as if they’d been dancing together for years.

It was captivating and another one of the spellbinding, intimate moments that had anyone else around coming across as intrusive. You didn’t want to break the magic that was between them.

It was also one of many moments where they were inches away from kissing and had you leaning into the screen, hoping that they’d give in to it.

Barrett followed his heart and talent and went into dance with a successful career on Broadway. And it showed with his skill and talent.

But sadly, Lucy couldn’t say the same. She shared that an injury made her change course in her life.

And while it seemed that she did find a new passion in law and helping people, you could tell that her love for dance was always something that lingered.

She only needed Barrett to reignite that love in their shared hobby again. Now that he’s opened that door for her, she can bring dance back into her life and have the balance that she craved.

The final dance sequence was the film’s highlight outside of Lucy and Barrett’s romance.

It was an impressive series of dance numbers. The little kids were absolutely precious, including a young wheel-chair user they incorporated into the dance with ease.

And the gay couple stealing a kiss in their tuxedos with tails was a cute moment too.

But naturally, Coleman and Bleu stole the dance routine with their sweet and sexy number.

Unfortunately, I’m not a High School Music diehard, so I can’t recall if there were any callbacks or nods to the cult hit that likely had Millennials tuning into this film.

But there was such a wonderful nostalgic feel to Coleman and Bleu dancing together, how in sync they were with each other, naturally, and the intoxicating performance they provided us through dance.

One minute you were wrapped up in the romance of it all, and the next, you wanted to dance along with them.

Again, the leads are what elevated this heartwarming movie to the enjoyable piece of work that it is.

The natural implementation of dance played to both of their strengths, endeared viewers, and fit in with the overarching theme and holiday vibe.

It’s the one-on-one moments with Lucy and Barrett that were the most captivating, from their talks as they got reacquainted with each other to their dancing together and the picturesque hideaway equipped with a herd of reindeer.

The film knew to lean into their leads and took full advantage of their stars and their chemistry. Coleman was radiant and sweet as Lucy, with a smile that could light up the room.

And Bleu was the consummate charming leading man who delivered heart eyes, and longing looks so well it had you giving Lucy the side-eye for second-guessing if Barrett was head over heels for her as she was with him.

Madam, they can see his love for you from the North Pole!

The leads and nostalgia carried the bulk of the movie, for sure. But it worked out well, so there’s little of which to complain.

We got multiple romantic, swoon-worthy kisses, which was a refreshing change of pace from the norm. It made up for the vague, handwaving involved with the couple figuring out how to pursue a relationship when they have two separate lives.

And we got a sweet secondary romance with Lucy’s mother and Uncle Hank. I only wish we saw more of theirs develop a bit more. They alluded to it more than presented it to us in a fully-fleshed-out manner.

But it was a sweet film, nonetheless, if not for anything, than to see this reunion between its stars.

So again, I ask, as a holiday film aficionado, can we keep them?

Over to you, Lifetime Fanatics!

What did you think of this one?! Are you a fan of High School music who looked forward to this reunion? How great was the chemistry in this movie? Do you think they should do more movies together?

Hit the comments below and tells us your thoughts.