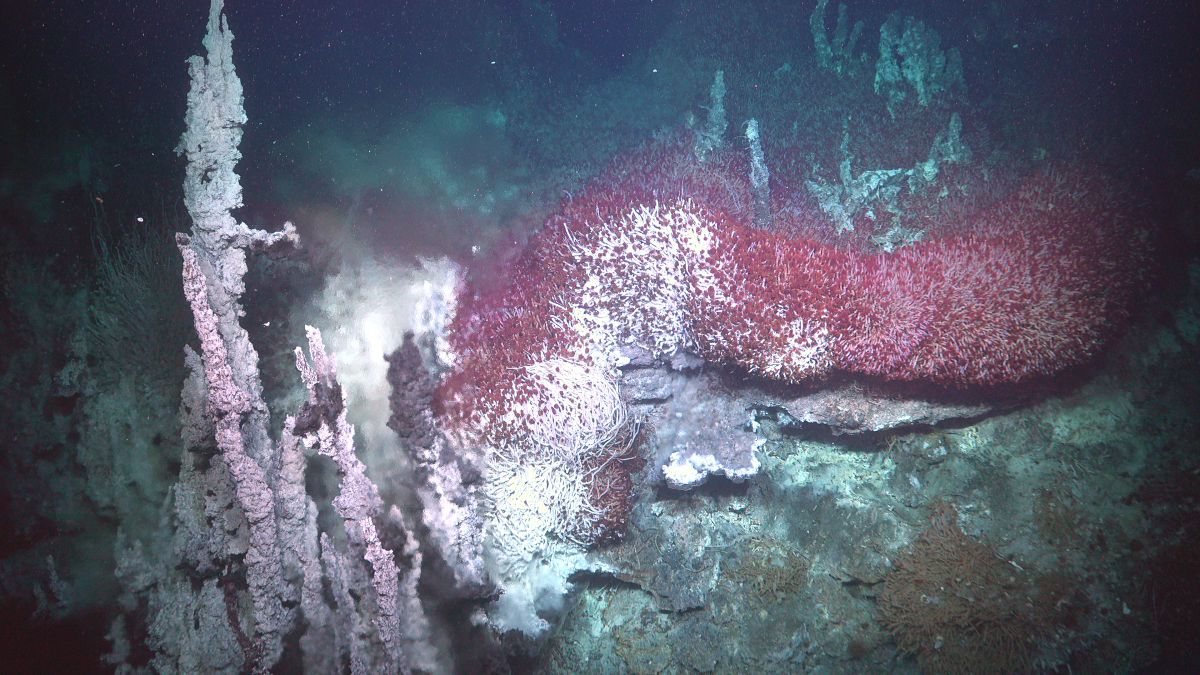 Wonderland of iridescent worms and hydrothermal vents found off Mexican

In the Gulf of California, off the coast of La Paz, Mexico, lies a mysterious world where searing hot water spews out of 80-foot-tall (24 meters) mounds and iridescent worms inch along the seafloor. Scientists recently discovered this hydrothermal wonderland, and as they explored the area, they also found at least six potential new animal species that haven’t been seen before.

The international team, which included scientists from both the U.S. and Mexico, conducted the recent expedition aboard a 272-foot-long (83 m) research vessel called the Falkor, according to a statement from the Schmidt Ocean Institute (SOI). From the ship, the team deployed a remotely operated vehicle (ROV), named SuBastian, to collect samples of hydrothermal vent fluid, mud, rocks and marine life and to take ultra-high definition videos. And using a sonar system on the ship, the team mapped out regions of the seafloor that will be explored more closely on future cruises.

Previous expeditions, conducted in 2012, 2015 and 2018, laid the foundation for this 2021 cruise, said David Caress, chief scientist of the expedition and the principal engineer for seafloor mapping at the Monterey Bay Aquarium Research Institute (MBARI). For example, in 2018, the same expedition team used an autonomous underwater vehicle (AUV) — a yellow, torpedo-shaped robot with a propeller on one end — to map out the seafloor using sonar.

At the resolution an AUV can achieve, you make out the overall features of hydrothermal vents, but “until you take the ROV down, you don’t know that it’s currently active,” Caress told Live Science. So this time around, the team probed these features more closely with an ROV and discovered a large number of active vents that spewed water reaching temperatures up to 549 degrees Fahrenheit (287 degrees Celsius).

Hydrothermal vents typically form in regions where two tectonic plates are moving away from one another, Caress said. In these areas, seawater seeps through cracks in the Earth‘s crust and comes into close contact with the hot mantle below; the water quickly heats up and shoots back toward the surface, creating a vent.

At most hydrothermal vents, the fluid exiting the vent runs black, because on its way to the surface, the water comes into contact with dark, basaltic rocks formed from cooled magma and it picks up metals, like iron. “Most of the hydrothermal venting that has been discovered and studied takes the form of these ‘black smokers,'” referring to the nickname for these vents, Caress said. But interestingly, in the Pescadero Basin, a depression located at the southern end of the Gulf of California, hydrothermal vents expel a clear, shimmering fluid, the expedition team found.

Oasisia tubeworms grow above a flange, created by minerals precipitating out of hydrothermal fluid. Sometimes the mineral deposits create long tall structures like chimneys, but in this case it created a flange, wherein with hydrothermal fluid pools underneath it. (Image credit: Schmidt Ocean Institute)

This likely occurs because a tremendous amount of sediment from the Mexican mainland ends up in the Gulf of California, and this sediment alters the fluids as they make their way to the surface. “The hydrothermal fluids start out interacting with the basalts … but then they have to percolate up through the sediment,” Caress said. This process strips the fluid of basalts and metals and replaces them with carbonates, including minerals like limestone, giving the fluid its unusual appearance.

This process also makes the fluid less acidic than that from black smokers and causes the resulting vents to take on unique structures. Instead of forming chimney-like structures that stand dozens of feet tall, vents in the Pescadero Basin tend to form ledge-like structures called flanges. The hydrothermal fluid pools beneath the flange and spills over its lip, creating a kind of reverse waterfall. And when the flanges accumulate too much limestone, they collapse under their own weight, forming enormous mounds. At the sites they surveyed, some of the mounds reached roughly 164 feet (50 m) across and 82 feet (25 m) tall, Caress said.

Following the expedition, some of the researchers will now work to better understand the geological and chemical properties of these unique vents. Others will create computer models of the larger underground system that fuels all the vents from below.

“I like to compare it to the plumbing of the system,” said Raquel Negrete-Aranda, co-chief scientist of the expedition and a marine geophysicist and geologist with the Ensenada Center for Scientific Research and Higher Education in Baja California. During the ROV dives, Negrete-Aranda and her colleagues measured temperature gradients on the seafloor and also collected data about the heat conductivity of the sediment. This information, combined with the geochemical data, will help scientists understand how and where the vent fields get their superheated water supply, she said.

There are two neighboring vent fields in the Pescadero Basin, and “I have a strong feeling that they are connected somehow,” meaning they link up beneath Earth’s crust, Negrete-Aranda told Live Science. “But … it’s kind of early to say,” as her lab is still crunching all the numbers.

While some scientists focused on the geology and chemistry of the vents, others focused on the diverse organisms living nearby. Blue scale worms (Peinaleopolynoe orphanae), which bear bright, iridescent scales, were crawling all over one vent. The team named this particular vent ‘Melsuu, which means “blue” in the Kiliwa dialect of the indigenous Yuman people of Baja California, according to the SOI statement.

During the expedition, the team spotted 10 known animal species that had not previously been observed in the Pescadero Basin. They also found at least six potential new species of crustaceans, mollusks, roundworms, arrow worms and bristle worms, or polychaetes, according to the SOI statement.

These creatures have been designated as “potential” new species until more thorough examinations of the animals’ genetics and morphology back in the lab can confirm that they haven’t been characterized before. That said, this species identification work really began on the ship, Caress said. For example, after the ROV hauled up a load of mud from the seafloor, Greg Rouse, a researcher who specializes in the study of invertebrates and animal biodiversity, would sift through the sediment in search of tiny worms and pinpoint all those that might be new to scientists.

In addition to searching for animals like snails, worms, anemones and crabs, one arm of the research team focused on microscopic life. Bacterial mats grow near the vents, and because different microbes thrive under slightly different conditions, the bacteria grow in distinct gradients, their colors shifting from white to grey to blue. The scientists plan to examine the microbes’ DNA and culture specimens in their labs, to better understand the environmental conditions each species needs to survive.

So although the expedition has ended, the data collected on the journey will keep the team busy for years to come. And hopefully within the next few years, the researchers will return to the Gulf of California to continue exploring hydrothermal vents in the relatively obscure regions to the north of Pescadero, Caress said.