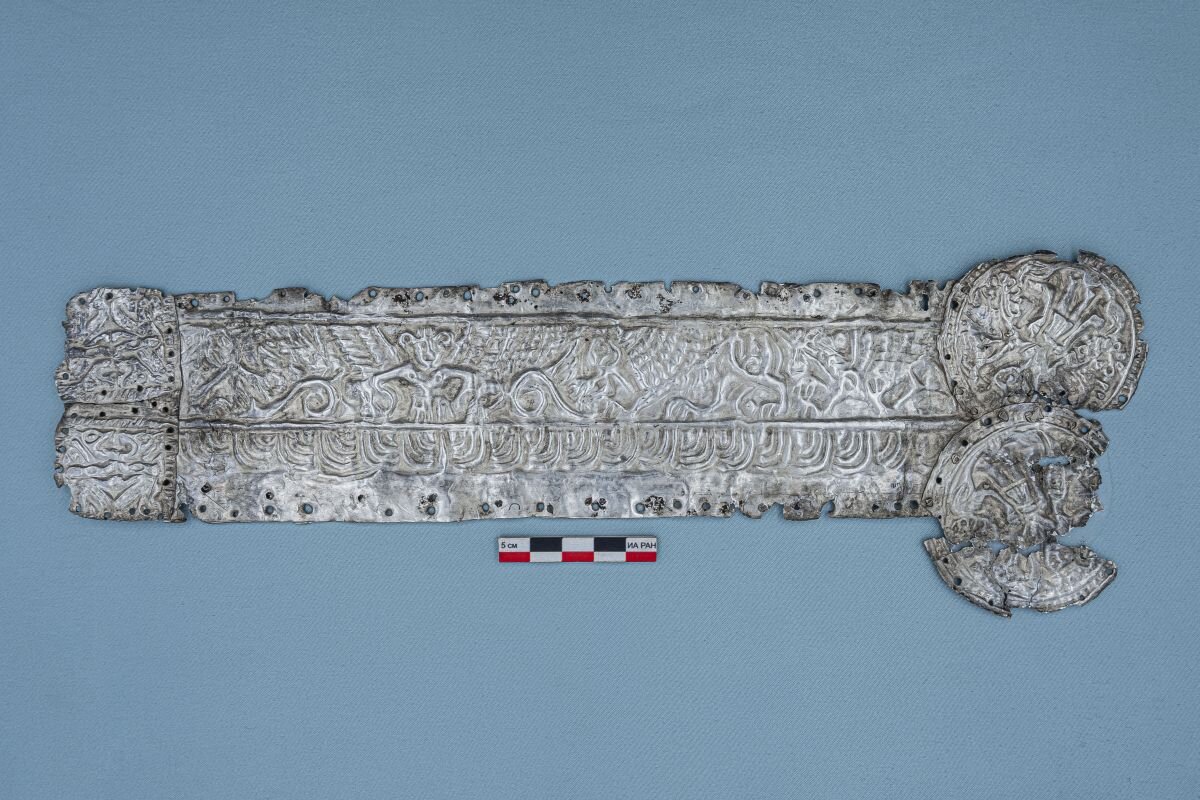 Winged Gods and walking griffons: A plate with a depiction

Silverplate with a depiction of Scythian Gods and eagle head griffons. Credit: Institute of Archaeology RAS

Expedition members of IA RAS have found a unique plate depicting winged Scythian gods surrounded by griffons during their excavations of the burial ground Devitsa V in Ostrogozhsky District of Voronezh region. This is the first case of such a finding in the Scythian barrows on Middle Don. No other items depictions of gods from the Scythian pantheon have been found in this area.

“The finding has made an important contribution to our concepts of Scythian beliefs. Firstly, a particular number of gods are depicted at once on one item. Secondly, it has never happened before that an item with depicted gods has been found so far from the north-east of the main Scythian centers,” said the head of the Don expedition, Prof. Valeriy Gulyaev.

Burial ground Devitsa V—named after the neighboring village area—was found in 2000 by the Don archaeological expedition of IA RAS. The site is situated on the hill of the right bank of the river Devitsa and is a group of 19 mounds which are situated in two parallel chains stretched from west to east. However, the significant part of ancient barrows has already disappeared: the necropolis area belongs to an agricultural sector and is being actively plowed.

Since 2010 the site has been systematically studied by the specialists from the Don expedition of IA RAS. During the cemetery excavations, some great discoveries have already been made. In 2019 in barrow 9 a burial was found which held the remains of a woman-warrior and an old lady in ceremonial female headwear known as a calathus.

In a field season in 2021, the Don archaeological expedition continued studying the necropolis. Archaeologists started the excavation of mound 7 in the central part of the cemetery Devitsa V in the vicinity of barrow 9.

The main grave referred to the Scythian times and dated back to the 4th century BC was located almost under the center of one mound and was a wooden tomb of 7.5×5 meters. In ancient times it was covered with oak half beams which were held by the seventeen large oak pillars on the gravesides. This is the biggest grave among all found in Devitsa V necropolis.

The barrow had already been plundered in ancient times. The robbers laid a wide test pit and “cleaned” a central part of the burial including the skeleton. However, by the time of the plundering the roof of the tomb had already fallen and that is why in the mixture of soil and tree remnants on the gravesides some grave goods have been preserved. Found items completely match the main elements of the Scythian “triad.” Equipment, harness, and “animal style” artifcats were found in a warrior’s grave.

There was a skeleton of a man of 40-49 years old in the grave. Next to his head archaeologists found many small gold semi-sphere plates which were decorated the funeral bed. Along with the skeleton an iron knife and a horse rib (likely, the remains of the ceremonial food), a spearhead, and three javelin’s heads were found. The scientists have been able to reconstruct the length of the weapon relying on that the counterweights of the lower part of the polearm that have been remained untouched. The spear was about 3.2 meters long, and the javelines’ length was about 2.2 meters.

In the southeast corner of the grave were fragments of three horse harness items: horse-bits, girth buckles, iron browbands, as well as iron, bronze, and bone Scythian pendants. The archaeologists have also found six bronze plates in the shape of wolves with grin laws which were decorated with horse cheeks—two on each harness. Next to the horse harness was a cut jaw of a young bear which testifies, according to the scientists, to the bear cult at the Scythes of Middle Don. Apart from it a molded cup and a big, black-glazed vessel have been found in different parts of the tomb.

In the northeast part of the grave separate from other items and a few meters far from the skeleton a silver square plate nailed by many small silver nails to a wooden base was found. The length of the plate was 34.7 cm, with the width in the middle part 7.5 cm.

In the central part of the plate is a winged figure facing a Goddess of animal and human fertility. The Goddess is known as Argimpasa, Cybele. The upper part of her body is stripped, and there is headwear, likely a crown with horns, on her head. The Goddess is surrounded on both sides with the figures of winged eagle-headed griffons. Depictions of this type, where the traditions of Asia Minor and ancient Greek are mixed, are often found in excavations of the Scythian barrows of the Northern Sea region, the Dnieper forest-steppe region, and the Northern Caucasus.

The left side of the plate is formed by two square plates decorated with the depictions of syncretic creatures standing in a so-called heraldic pose (in front of each other, close to each other with their paws). From the right side, two round buckles are attached to the plate on each of which one anthropomorphic character with a crown on his head standing surrounded by two griffons is depicted. Who those characters are and which item was decorated by this plate remains an open issue.

Citation: Winged Gods and walking griffons: A plate with a depiction of Scythian Gods has been found in Middle Don (2021, November 19) retrieved 5 December 2021 from https://phys.org/news/2021-11-winged-gods-griffons-plate-depiction.html

Facebook
Twitter
Pinterest
WhatsApp
Previous articleGet a First Look at Julia Garner as the Notorious
Next articleYellowstone Round Table: Can the Feud Between Rip and Lloyd