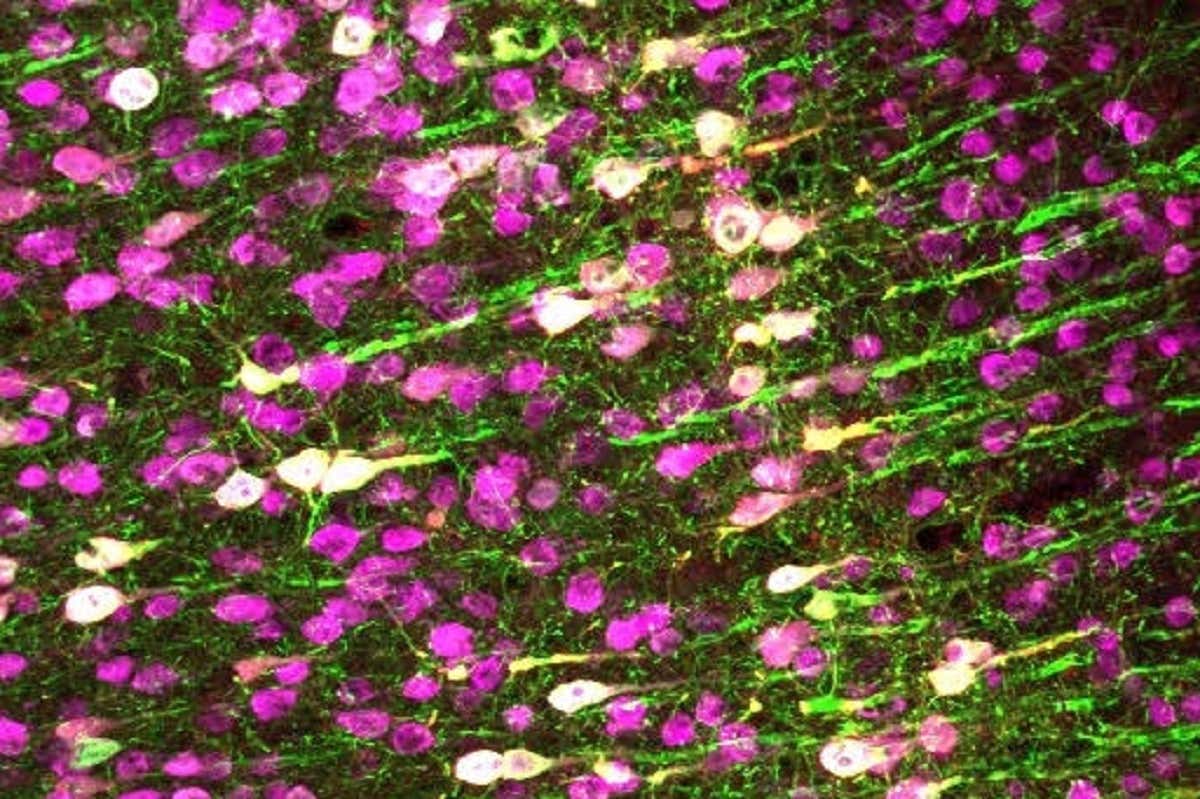 A new technique called sonogenetics uses ultrasound to switch on and off genetically altered brain cells. It has been successfully tested in mice, and could be a future tool for treating brain conditions such as Parkinson’s or epilepsy in humans

Neurons (magenta) in a mouse brain

Ultrasound waves have been used to control genetically altered brain cells in mice, a step towards using this technique to treat conditions such as Parkinson’s disease or epilepsy in humans.

One of the biggest advances in neuroscience of the past two decades is a method called optogenetics, in which cells are genetically tweaked so they can be turned on or off with light. Now the technique has been adapted to control brain cells via ultrasound, which opens up new possibilities for brain research and developing treatments for neurological disorders, says Sreekanth Chalasani at the Salk Institute for Biological Studies in San Diego, California.

Optogenetic experiments involve making the brain cells of animals such as mice respond to light by adding a gene originally found in algae. They have led to a raft of discoveries about how different circuits within the brain affect behaviour, but the animals need to have fibre-optic cables put into their heads, which makes the work more complicated.

Chalasani and his colleagues have been working with a different gene called TRPA1, normally found in human brain and heart cells, which encodes a membrane protein that typically helps the cells respond to toxic chemicals.

When the brain cells of mice were given a copy of this gene, they started firing in response to ultrasound beamed directly at a small area of their heads. The frequency that elicited the response was 7 megahertz, which is known not to damage biological tissues. The team calls this approach “sonogenetics”.

So far, the main medical application for optogenetic therapies has been putting such genes into people’s eyes to restore sight to those who are blind, as plenty of light reaches the eye.

But sonogenetic therapies could potentially control brain cells inside the head without having to implant any light sources. People could have specific groups of brain cells turned on and off with ultrasound waves, which would pass through the skull. “You could build a tool box for making different brain cells sensitive to different frequencies of ultrasound,” says Chalasani.

The approach could one day be used as a treatment for epilepsy or Parkinson’s disease, for instance. But first there needs to be a way to deliver the TRPA1 gene into nerve cells inside the head, by getting past the blood-brain barrier.