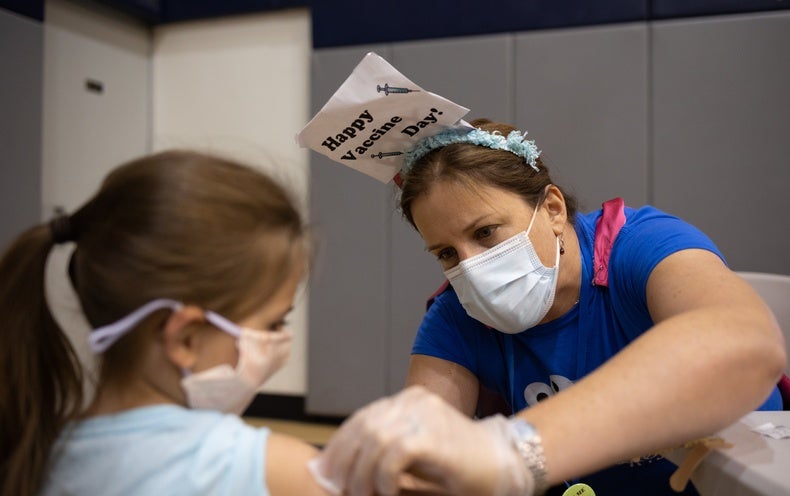 The Benefits of Vaccinating Kids against COVID Far Outweigh the

Parents who are considering whether to vaccinate their child against COVID may have heard about the risk of a rare side effect called myocarditis, an inflammation of the heart tissue that has occurred in some teenagers and young adults who have received an mRNA vaccine. These parents may be wondering, “Is this something I should be worried about for my child?”

Here is what scientists know: Vaccine-related myocarditis is extremely rare; estimates vary, but the highest figures suggest there have been fewer than 200 cases per million fully vaccinated males ages 12–15, the youngest age group for which such data currently exist. Only about 30 cases per million have been reported in vaccinated females of that age. Pfizer, whose mRNA vaccine was recently authorized for use in five- to 11-year olds, says it did not observe any myocarditis cases in its clinical trial for the latter age group (it would be nearly impossible to design a trial large enough to detect such a rare effect). Scientists expect it to be even rarer in 5–11-year-old kids compared with teens, because myocarditis from any cause is less common in the younger age group. The vaccine dose authorized for that group is lower, as well.

The risk of getting COVID itself is much greater. From the beginning of March to October 10, over 1.9 million children in the U.S. ages five to 11 contracted the disease, according to data from the Centers for Disease Control and Prevention. More than 8,300 kids in that age range were hospitalized with COVID, and 94 died. In addition to causing an acute infection, COVID can also trigger a sometimes-deadly inflammatory syndrome known as MIS-C, which is most common in the 5–11 age group. And, as in adults, COVID in children can also lead to lingering symptoms—such as fatigue, shortness of breath, or neurological issues—known as long COVID. Vaccination helps protect kids from all three conditions.

Scientists at the Food and Drug Administration have modeled the risks to children from COVID itself versus vaccine-related myocarditis. Their model compares the likely number of COVID cases, hospitalizations and deaths prevented among vaccinated kids aged 5–11 with the estimated number of “excess,” or vaccine-related, myocarditis cases, hospitalizations and deaths (which were extrapolated from the risks in 12–15-year-olds). The model considers males and females separately, as young males have a higher risk of myocarditis compared with young females.

The model’s main scenario was based on the incidence of COVID in the U.S. as of September 11, 2021, and assumed a vaccine efficacy of 70 percent against disease and 80 percent against hospitalization. FDA researchers also modeled the risk-benefit tradeoff for vaccinating kids under higher and lower rates of COVID transmission and hospitalization. Under the lower-transmission scenario, the risks of myocarditis from vaccination could potentially exceed the benefits of vaccination, especially for males. But under the higher-transmission scenario, the benefits of vaccination significantly outweighed the myocarditis risk. And if the rates of vaccine-related myocarditis in younger kids turn out to be lower than those in teenagers, as expected, the scale tilts even further in favor of vaccination.

“What we know from the adolescent and young adult age group is that the vaccine-associated myocarditis was a very rare occurrence,” says Sallie Permar, chair of the pediatrics department at Weill Cornell Medicine and pediatrician-in-chief at New York-Presbyterian Komansky Children’s Hospital. Those who do develop this side effect typically have some chest pain and feel bad for a day, and blood tests show some inflammation of the heart, Permar says. They may be hospitalized for monitoring and treated with ibuprofen, and usually walk out after a day. “That is completely different than the myocarditis that we see that’s associated with virus itself,” Permar says.

Myocarditis can also be triggered by infections including COVID, which is far more likely to do so than vaccines are, Permar says. Moreover, COVID-related myocarditis symptoms are usually much more severe than those seen in vaccine-related myocarditis, with the former leading to an average hospital stay of six days instead of one, she says. Infection-related myocarditis often requires lifesaving interventions such as medicines that help keep the heart pumping, or even a heart-lung bypass machine—and such cases often result in lasting heart damage.

As of December 1, about 4.2 million children between the ages of five and 11 had gotten at least one dose, according to the CDC. Vaccinating children protects not only them but people around them too. This is especially important as winter approaches in the U.S. and people spend more time indoors, and with the new and potentially more transmissible Omicron variant circulating.

“Your children deserve to be protected against this virus as much as adults do,” Permar says. “The more people we get vaccinated,” she adds, “the better off we’ll be.”