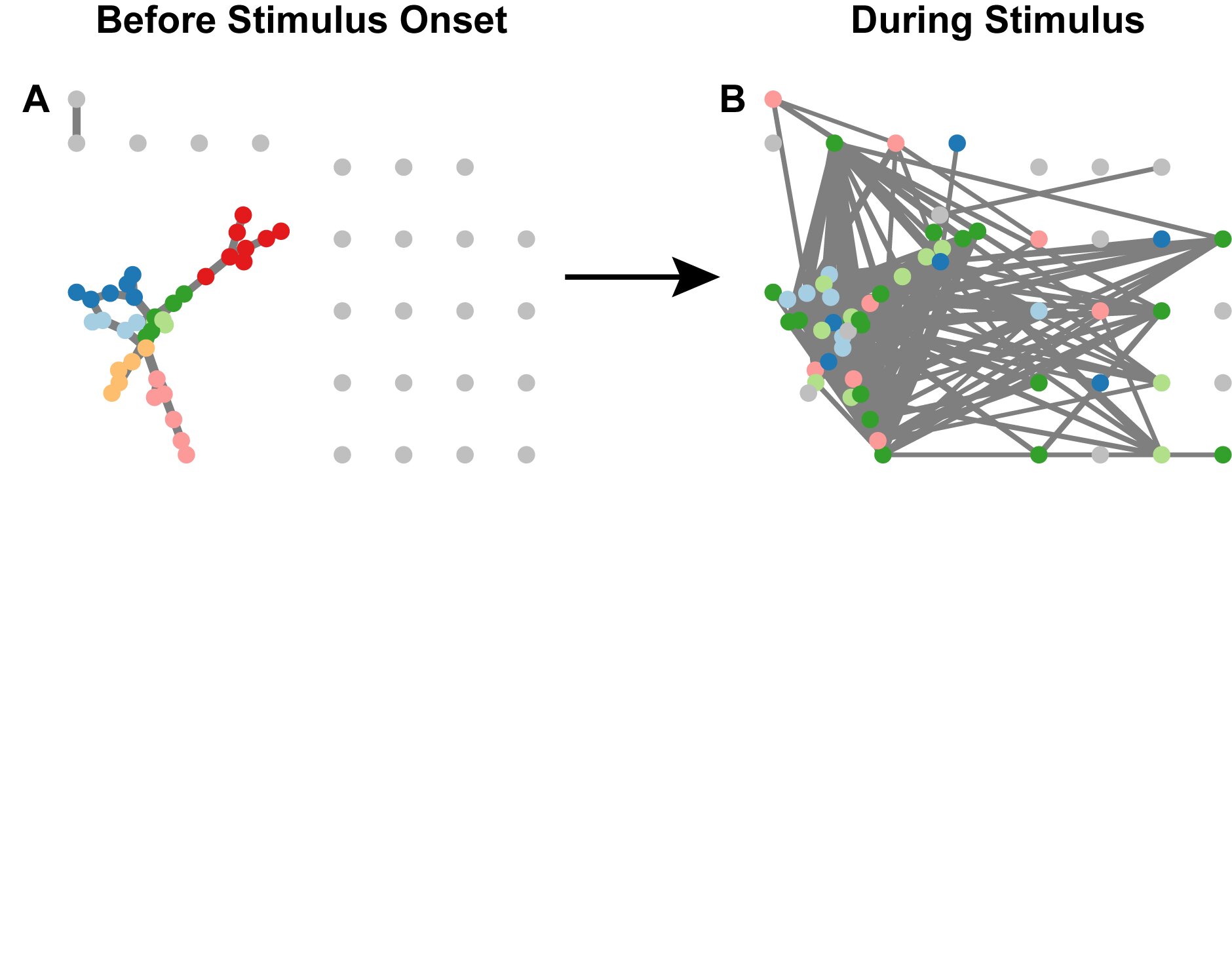 Scientists use machine learning to predict smells based on brain

The neurons of the worm function differently when tasting salt. Each circle represents a neuron, and the connections between the circles are synapses. The scientists used graph theory to group some neurons into modules, which are identified by their colors. The number of modules was reduced to 5 (from 7) when the salt stimulus was presented to the worm. This signifies that these neurons are particularly important when the animal tastes salt. Credit: Salk Institute

It sounds like a party trick: scientists can now look at the brain activity of a tiny worm and tell you which chemical the animal smelled a few seconds before. But the findings of a new study, led by Salk Associate Professor Sreekanth Chalasani, are more than just a novelty; they help the scientists better understand how the brain functions and integrates information.

“We found some unexpected things when we started looking at the effect of these sensory stimuli on individual cells and connections within the worms’ brains,” says Chalasani, member of the Molecular Neurobiology Laboratory and senior author of the new work, published in the journal PLOS Computational Biology on November 9, 2021.

Chalasani is interested in how, at a cellular level, the brain processes information from the outside world. Researchers can’t simultaneously track the activity of each of the 86 billion brain cells in a living human—but they can do this in the microscopic worm Caenorhabditis elegans, which has only 302 neurons. Chalasani explains that in a simple animal like C. elegans, researchers can monitor individual neurons as the animal is carrying out actions. That level of resolution is not currently possible in humans or even mice.

Chalasani’s team set out to study how C. elegans neurons react to smelling each of five different chemicals: benzaldehyde, diacetyl, isoamyl alcohol, 2-nonanone, and sodium chloride. Previous studies have shown that C. elegans can differentiate these chemicals, which, to humans, smell roughly like almond, buttered popcorn, banana, cheese, and salt. And while researchers know the identities of the small handful of sensory neurons that directly sense these stimuli, Chalasani’s group was more interested in how the rest of the brain reacts.

The researchers engineered C. elegans so that each of their 302 neurons contained a fluorescent sensor that would light up when the neuron was active. Then, they watched under a microscope as they exposed 48 different worms to repeated bursts of the five chemicals. On average, 50 or 60 neurons activated in response to each chemical.

By looking at basic properties of the datasets—such as how many cells were active at each time point—Chalasani and his colleagues couldn’t immediately differentiate between the different chemicals. So, they turned to a mathematical approach called graph theory, which analyzes the collective interactions between pairs of cells: When one cell is activated, how does the activity of other cells change in response?

This approach revealed that whenever C. elegans was exposed to sodium chloride (salt), there was first a burst of activity in one set of neurons—likely the sensory neurons—but then about 30 second later, triplets of other neurons began to strongly coordinate their activities. These same distinct triplets weren’t seen after the other stimuli, letting the researchers accurately identify—based only on the brain patterns—when a worm had been exposed to salt.

“C. elegans seems to have attached a high value to sensing salt, using a completely different circuit configuration in the brain to respond,” says Chalasani. “This might be because salt often represents bacteria, which is food for the worm.”

The researchers next used a machine-learning algorithm to pinpoint other, more subtle, differences in how the brain responded to each of the five chemicals. The algorithm was able to learn to differentiate the neural response to salt and benzaldehyde but often confused the other three chemicals.

“Whatever analysis we’ve done, it’s a start but we’re still only getting a partial answer as to how the brain discriminates these things,” says Chalasani.

Still, he points out that the way the team approached the study—looking at the brain’s network-wide response to a stimulus, and applying graph theory, rather than just focusing on a small set of sensory neurons and whether they’re activated—paves the way toward more complex and holistic studies of how brains react to stimuli.

The researchers’ ultimate goal, of course, isn’t to read the minds of microscopic worms, but to gain a deeper understanding of how humans encode information in the brain and what happens when this goes awry in sensory processing disorders and related conditions like anxiety, attention deficit hyperactivity disorders (ADHD), autism spectrum disorders and others.

The other authors of the new study were Saket Navlakha of Cold Spring Harbor Laboratory and Javier How of UC San Diego.

Citation: Scientists use machine learning to predict smells based on brain activity in worms (2021, November 19) retrieved 23 November 2021 from https://phys.org/news/2021-11-scientists-machine-based-brain-worms.html