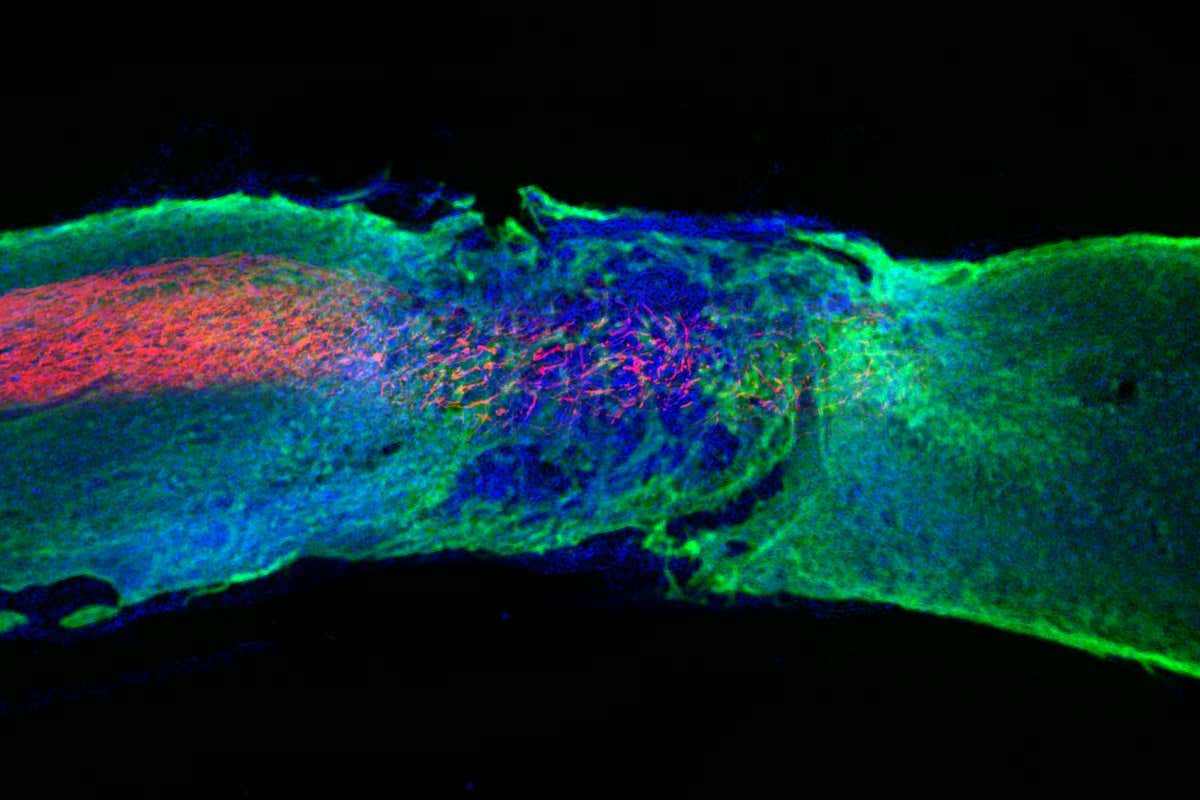 Paralysed mice walk again after gel is injected into spinal

A section of the spinal cord in a mouse treated with the gel, showing regenerated nerve fibres in red

A self-assembling gel injected at the site of spinal cord injuries in paralysed mice has enabled them to walk again after four weeks.

The gel mimics the matrix that is normally found around cells, providing a scaffold that helps cells to grow. It also provides signals that stimulate nerve regeneration.

Samuel Stupp at Northwestern University in Chicago and his colleagues created a material made of protein units, called monomers, that self-assemble into long chains, called supramolecular fibrils, in water.

When they were injected into the spinal cords of mice that were paralysed in the hind legs, these fibrils formed a gel at the injury site.

The researchers injected 76 paralysed mice with either the fibrils or a sham treatment made of salt solution, a day after the initial injury. They found that the gel enabled paralysed mice to walk by four weeks after the injection, whereas mice given the placebo didn’t regain the ability to walk.

The team found that the gel helped regenerate the severed ends of neurons and reduced the amount of scar tissue at the injury site, which usually forms a barrier to regeneration. The gel also enhanced blood vessel growth, which provided more nutrients to the spinal cord cells.

“The extent of functional recovery and solid biological evidence of repair we observed using a model that truly emulates the severe human injury makes the therapy superior to other approaches,” says Stupp.

Other experimental treatments being developed for paralysis use stem cells, genes or proteins and have questionable safety and effectiveness, says Stupp.

The walking ability of mice was assessed in two ways. First, the mice were given an overall score to represent their ankle movement, body stability, paw placement and steps. Mice treated with the gel had a score three times higher than sham-treated mice.

The team also assessed walking ability by dipping the hind legs of the mice in coloured dyes and letting them walk across a narrow runway lined with white paper. This test showed that the gel increased both stride width and length.

“A higher stride length and width should correlate with more regrown axons [nerve fibres] innervating the muscles of the leg,” says Stupp.

The gel’s regenerative effect is due to short sequences of amino acids attached to the ends of the monomer proteins. These sequences provide regenerative signals that are picked up by receptors on the surface of spinal cord cells.

By altering the non-signal part of these monomers, the team found that enhancing the ability of the molecules to shift in and out of the larger fibril structure enhanced the recovery of mice, probably because the increased motion enabled the signals to engage with more receptors on the cells.

“It would be very exciting if this finding could translate to humans, though issues of scaling mouse therapies to humans are not trivial,” says Ann Rajnicek at the University of Aberdeen, UK.