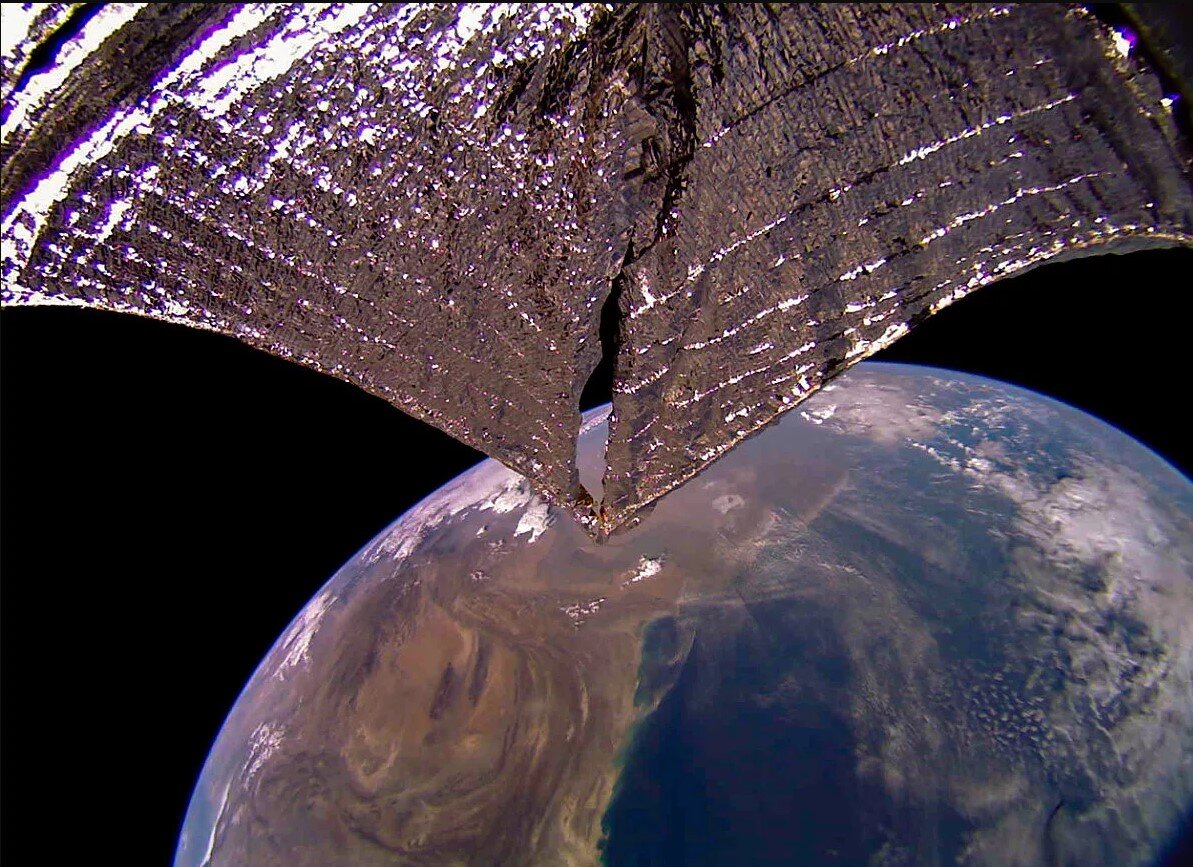 LightSail 2 has been flying for 30 months now, paving

his image taken by The Planetary Society’s LightSail 2 spacecraft on May 31, 2021 shows Afghanistan, Pakistan, and the Arabian Sea. The Caspian Sea is at lower left. The shadows of the spacecraft’s solar panels can be seen on the sail. North is approximately at the top left. This image has been color-adjusted and some distortion from the camera’s 180-degree fisheye lens has been removed. Credit: The Planetary Society

Even after 30 months in space, The Planetary Society’s LightSail 2 mission continues to successfully “sail on sunbeams,” demonstrating solar sail technology in Earth orbit. The mission is providing hard data for future missions that hope to employ solar sails to explore the cosmos.

LightSail 2, a small cubesat, launched in June 2019 on a SpaceX Falcon Heavy, as a demonstration mission to test how well a solar sail could change the orbit of a spacecraft. A month after launch, when LightSail 2 unfurled its ultra-thin 32-square-meter Mylar sail, the mission was declared a success because the sail raised the orbit of the small, loaf-of-bread-sized spacecraft.

“We’re going to a higher orbital altitude without rocket fuel, just with the push of sunlight,” The Planetary Society’s (TPS) CEO Bill Nye said at a press conference following the deployment. “This idea that you could fly a spacecraft and could get propulsion in space form nothing but photons, it’s surprising, and for me, it’s very romantic that you’d be sailing on sunbeams.”

TPS, whose members funded the $7 million mission, said it shares mission data with NASA to assist three upcoming solar sail missions: NEA Scout, Solar Cruiser and ACS3. NEA Scout is scheduled to hitch a ride to lunar space as early as February 2022 on NASA’s Space Launch System rocket during the Artemis I test flight. The mission will use its solar sail to leave the vicinity of the Moon and visit an asteroid.

Solar sails use the power of photons from the sun to propel spacecraft. While photons have no mass, they can still transfer a small amount of momentum. So when photons hit the solar sail, the craft is pushed very slightly away from the sun. Over time, if a spacecraft is out in space without any atmosphere to encumber it, it could potentially accelerate to incredibly high speeds.

But LightSail 2 is in in orbit around the Earth. As the spacecraft swings its sails into the sunlight, it raises its orbit by as much as few hundred meters a day. But the small spacecraft doesn’t have the means to tilt the sails precisely enough to prevent lowering its orbit on the other side of the planet. Eventually, LightSail 2 will dip far into the Earth’s atmosphere to succumb to atmospheric drag. It will deorbit and burn up.

A recent update from TPS says that LightSail 2’s altitude above Earth is currently about 687 kilometers.

This image taken by The Planetary Society’s LightSail 2 spacecraft on Aug. 7, 2021 shows tropical storm Mirinae off the coast of Japan during the Tokyo Olympics. North is approximately at top left. This image has been color-adjusted and some distortion from the camera’s 180-degree fisheye lens has been removed. Credit: The Planetary Society

“Thanks to optimized sail pointing over time, altitude decay rates during recent months have been the best of the entire mission,” wrote TPS’s Jason Davis. “Thrust even occasionally overcame atmospheric drag, slightly raising the spacecraft’s orbit. Additionally, below-average sun activity has kept Earth’s upper atmosphere thin for much of the mission, creating less drag on the sail.”

But the sun has recently become more active, emitting significant solar flares. The LightSail 2 team believes that this activity is likely now causing higher orbital decay rates than those seen earlier in the mission. However, mission engineers estimate the spacecraft could stay in orbit at least another year.

And in the meantime, while the spacecraft keeps sending back incredible pictures from orbit, engineers continue to glean insights that can be passed along to future missions.

LightSail 2 has now been in space for 2 years, and should last even longer before re-entering the atmosphere Provided by Universe Today