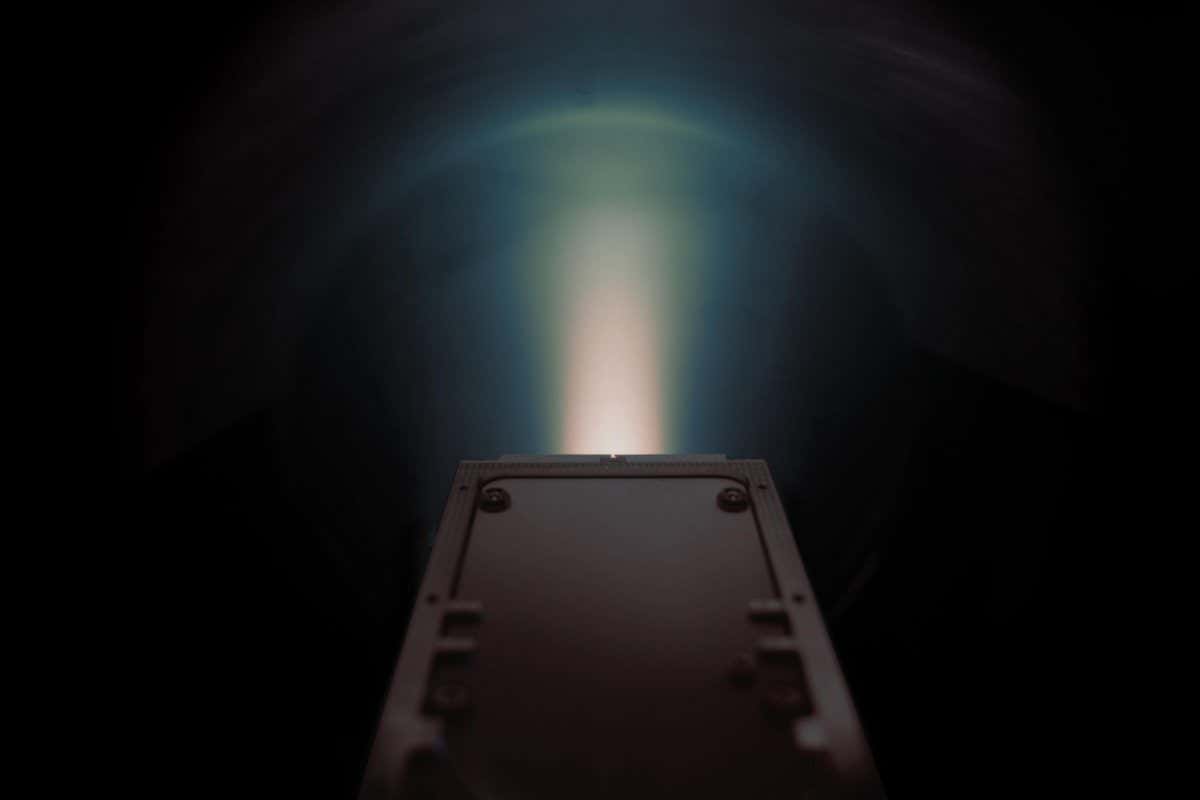 Many satellites use xenon as a propellant to help them change orbit or avoid collisions, but the gas is expensive – now we know iodine provides a cheaper alternative

The iodine electric propulsion system firing in a vacuum chamber

A satellite has been successfully powered by iodine for the first time. Iodine performed better than the traditional propellant of choice, xenon – highlighting iodine’s potential utility for future space missions.

Currently, xenon is the main propellant used in electric propulsion systems, but the chemical is rare and expensive to produce. As a gas, xenon must also be stored at very high pressures, which requires specialised equipment.

Iodine has a similar atomic mass to xenon but is more abundant and much cheaper. It can also be stored as an unpressurised solid, meaning it has the potential to simplify satellite designs.

Dmytro Rafalskyi at ThrustMe, a space technology company based in France, and his colleagues have developed an electric propulsion system that uses iodine.

The propulsion system first heats up a solid block of iodine, turning it into a gas. The gas is bombarded with high-speed electrons, which turns it into a plasma of iodine ions and free electrons. Negatively charged hardware then accelerates the positively charged iodine ions from the plasma towards the system’s exhaust and propels the spacecraft forwards.

The team tested this propulsion system in space on a small 20-kilogram CubeSat satellite. The satellite was launched onboard a rocket on 6 November 2020 and was placed in orbit at an altitude of 480 kilometres. The team successfully operated the system 11 times in a series of small manoeuvres up to 28 February 2021.

The group found that the iodine system slightly outperformed xenon systems, with a higher overall energy efficiency, which showcases the viability of iodine as a propellant.

“If we want sustainable space exploration, where we don’t create as much space junk as today, we need to put propulsion systems on all satellites, even the smallest ones,” says Rafalskyi. This could allow a satellite to come back to Earth instead of staying in orbit at the end of its life, he says, and “it seems iodine is one of the ways to reach that goal”.

There are some difficulties with iodine that need to be addressed says Rafalskyi. For example, iodine reacts with most metals, so the team had to use ceramics and polymers to protect parts of the propulsion system. In addition, solid iodine takes about 10 minutes to turn into a plasma, which may not provide a propellant quickly enough for emergency manoeuvres to avoid an in-orbit collisions.

Sign up to Lost in Space-Time, a free monthly newsletter on the weirdness of reality