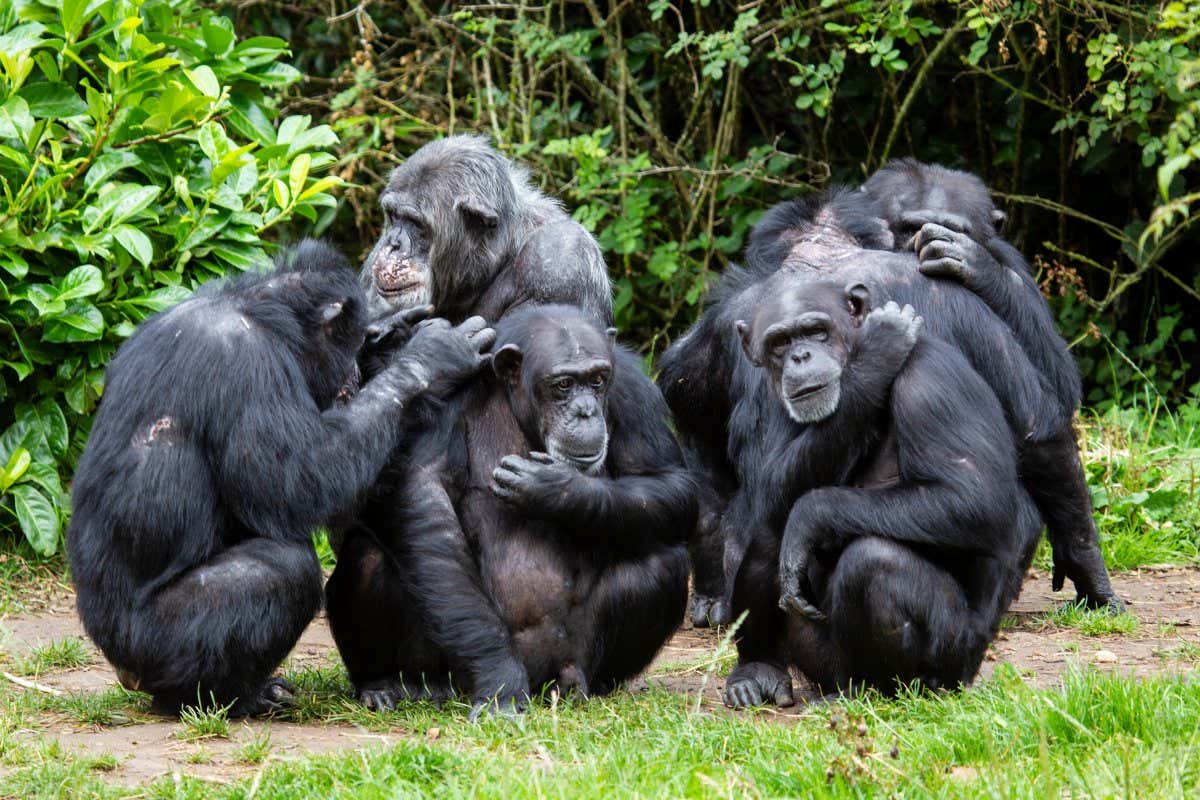 Chimpanzees dislike the smell of death like we do

Some chimpanzees will carry around an infant that did not survive, which made researchers wonder if they are as sensitive to the chemicals that produce odours in dead bodies

A group of chimpanzees grooming each other

Chimpanzees avoid the smell of dead things, much like we do. This odour may play a key role when chimpanzee mothers grieve their young.

It is thought that humans and some other animals evolved disgust for putrescine – the chemical odour compound associated with decomposing bodies – to protect them from disease or predation by scavengers. However, nobody had tested whether chimpanzees were sensitive to the smell of death, says James Anderson at Kyoto University in Japan.

He and his colleagues investigated this with two female and four male chimpanzees, all aged between 24 and 48 years old, that were housed in Kyoto University’s Kumamoto Sanctuary.

One night a week over a six-week period, the chimpanzees returned to their cages after roaming in the sanctuary to find either a stuffed dead bird or a stuffed glove in a cardboard box just outside their cages. The researchers dispersed odours from a bucket, using a fan to waft the scents of water, putrescine or other substances.

The chimpanzees avoided the object significantly more when putrescine was diffused, regardless of whether it was a bird or a glove, says Anderson.

“With the putrescine, it was clear that the chimps wanted away from there,” he says. The two oldest individuals, aged 46 and 48, were the least repulsed by the smell of putrescine.

Chimpanzee mothers sometimes carry dead infants for weeks or months. The researchers didn’t test such mothers, but they suspect that these apes accept the odours due to attachment to their infants, or they might just get used to the smell. Post-partum chimpanzees may also have a reduced sense of smell, but studies would be needed to test this, says Anderson.

Eventually, often at a time when the putrescine odour would be the strongest – around two to four days after death – chimpanzee mothers abandon their dead babies, says Anderson.

The putrescine might be the clue that helps the mothers “move on”, he says. “Even if you had an emotional investment in this individual when it was alive, you’ve got to move on because there’s a danger there of picking up some illness or crossing paths with some fairly dangerous animals that may be showing up soon.”

The fact that chimpanzee mothers overcome the smell of decomposition to hold on to their babies well after death suggests a behavioural need that should be respected in captive situations – something that is becoming more common thanks to the team’s ongoing work over the past decade, says Anderson.

“We’ve noticed that more zoos are now allowing bereaved mothers to stay with their dead infants for a day or two, so that they can come to terms with their loss, rather having this traumatic separation [from the corpse by zookeepers],” he says.

Sign up for Wild Wild Life, a free monthly newsletter celebrating the diversity and science of animals, plants and Earth’s other weird and wonderful inhabitants