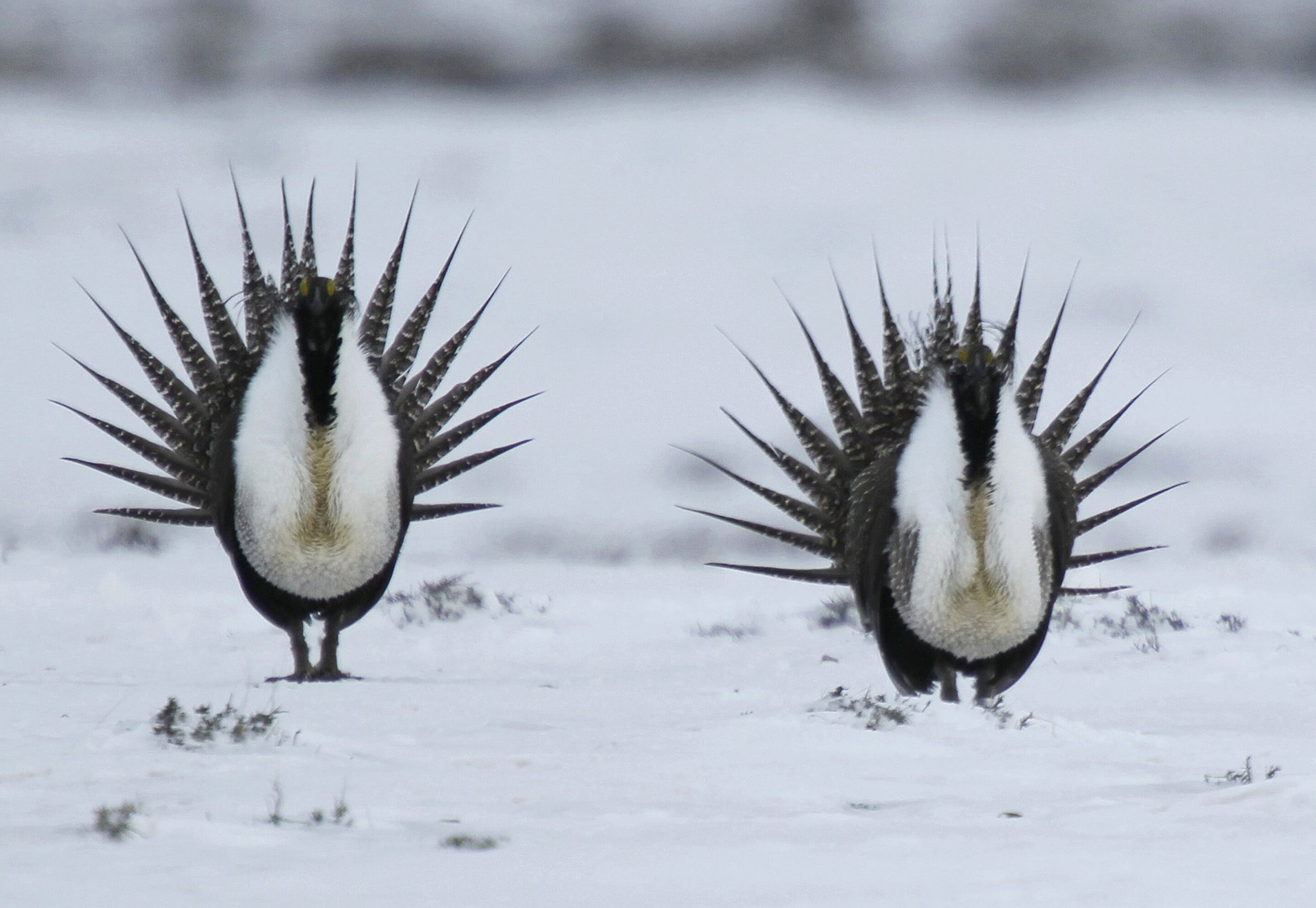 In this April 20, 2013 file photo, male Greater Sage Grouse perform their mating ritual on a lake near Walden, Colo. The Biden administration is considering new measures to protect the ground-dwelling bird that was once found across much of the U.S. West. It has lost vast areas of habitat in recent decades due to oil and gas drilling, grazing, wildfires and other pressures. Credit: AP Photo/David Zalubowski, File

The Biden administration on Friday said it will consider new measures to protect greater sage grouse, a bird species once found across much of the U.S. West that has suffered drastic declines in recent decades due to oil and gas drilling, grazing, wildfires and other pressures.

The announcement of a range-wide evaluation of habitat plans for greater sage grouse came after the Trump administration tried to scale back conservation efforts adopted when Biden was vice president in 2015.

Disagreement over the region’s sage grouse is longstanding and often bitter, and any new restrictions the administration adopts against energy or agriculture is sure to further inflame tensions. Republican-run states and industries that profit off public lands have clashed with wildlife advocates over how much space the birds need to survive.

Many environmentalists insisted that the 2015 conservation plans didn’t go far enough because of loopholes that allowed grazing and drilling on land that sage grouse need. Opponents said they hobbled economic progress.

Bureau of Land Management Deputy Director Nada Culver said “everything’s on the table” as the agency launches its evaluation of sage grouse habitat, with no set deadlines for action.

Officials also will look at how climate change is adding to pressures on sage grouse. Culver pointed to data showing wildfires burned almost 10,700 square miles (28,000 square kilometers) of the bird’s habitat since 2016. The vast majority of the fires were on federal lands.

In this Aug. 14, 2012 file photo a man tosses dirt on a fire as he tries to save his home on Bettas Road near Cle Elum, Wash. Federal officials are considering changes to land use plans across much of the U.S. West to help conserve greater sage grouse, a ground-dwelling bird that’s seen huge areas of habitat destroyed by wildfires and human activities. Credit: AP Photo/Elaine Thompson,File

Greater sage grouse once numbered in the millions across all or portions of 11 Western states. Populations have dropped 65% since 1986, government scientists recently concluded.

In 2010, wildlife officials said drastic habitat losses meant protections for sage grouse had become warranted for under the Endangered Species Act. However, the U.S. Fish and Wildlife Service did not take any action at the time, saying other species took priority.

In 2015, the wildlife service determined protections were no longer needed after other federal and states officials adopted sweeping land management plans meant to halt or reverse the species’ decline.

The plans were billed as a compromise, but some components unraveled after Trump took office in 2017 and states sought changes to the documents that critics said would hurt grouse.

The quirky birds with long tail feathers are known for elaborate courtship displays in which males puff up air sacs in their chests to make an odd popping sound.

“Wyoming knows how to manage the greater sage grouse, and I’m very concerned that greater federal control will do nothing for the birds, but be devastating for ranchers and energy producers,” said Lummis.

Gordon noted that Wyoming has more sage grouse than any other state and said “no changes are necessary.”

In this April 20, 2013 file photo, male greater sage grouse perform mating rituals for a female grouse, not pictured, on a lake outside Walden, Colo. The Biden administration is considering new measures to protect the ground-dwelling bird that was once found across much of the U.S. West. It has lost vast areas of habitat in recent decades due to oil and gas drilling, grazing, wildfires and other pressures. Credit: AP Photo/David Zalubowski, File

Daines said state and local conservation efforts needs to be protected from “federal overreach,” while Brooke Stroyke, a spokesperson for Gianforte, said Montana already has a plan that balances conservation and rural economies.

In May, federal officials in response to a court order said that they would consider bans on new mining to help the birds.

The land bureau has resumed that process. It will consider the original proposal and additional options, spokesperson Alyse Sharpe said.

The order to take a new look at mining came in a lawsuit from environmentalists. The judge faulted the Trump administration for ignoring prior science on the issue.

Erik Molvar with plaintiff Western Watersheds Project said falling back on the Obama-era plans would not work, because they allowed too much disturbance of sage brush habitat, he said.

“The Obama administration did their best to please all the different ends of the political spectrum. But in the end they didn’t please anybody and they didn’t give the sage grouse the habitat they needed,” Molvar said.

Kathleen Sgamma with the Western Energy Alliance, a group representing oil and gas companies, said Friday’s move by the administration came as no surprise.

“Sage grouse has been a political football for decades,” she said. “The back and forth continues.”

Feds to ease land restrictions across US West

© 2021 The Associated Press. All rights reserved. This material may not be published, broadcast, rewritten or redistributed without permission.