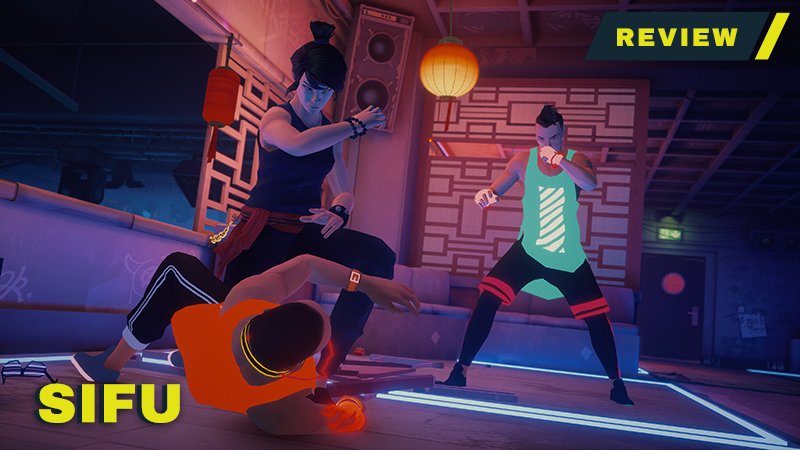 Sloclap’s first game, Absolver, was overly ambitious. It was a multiplayer melee brawler that also tried to be a single-player experience, both of which were tied together with an extremely long move list and a woefully ineffective tutorial. It was aimless, barren, and somewhat impenetrable, but it had potential. Sifu is the result of Sloclap realizing that missed potential, learning from its past mistakes, and focusing on its craft to ensure that its second bout would hit with the full force of its weight and result in one of the most punishing and satisfying melee combat games in the genre.

Sifu is punishing and then satisfying in that order. After its unexpected intro and brief yet highly stylized tutorial, it dumps new players straight into the game. Fast and brutal enemies will devour white belts right from the jump and send them to the “Game Over” screen in record time. Whereas novices can inch through other challenging games like Dark Souls and Celeste and bounce from checkpoint to checkpoint, Sifu’s aging system isn’t as forgiving. The protagonist starts at 20 years old and dying picks them up on the spot but ages them up more upon each death; the first visit from the Grim Reaper skips one birthday, the second jumps two, and so on. Beating mini-bosses and bosses can decrease that counter, but once the 70-year-old threshold is crossed, that’s it. This system severely penalizes sloppy play and barely scraping by. Finishing an early level around age 50 or 60 is essentially useless because that damns players later down the line when the fights only get tougher.

It is remarkably inaccessible, but it’s a crafty approach that forces users to adopt a key facet of martial arts: practice. Players have to repeat the same actions over and over in order to master Sifu and failure is just a natural step. Replaying levels multiple times and steadily improving with each go is a gratifying process because it guarantees that users actually engage with its systems without mashing through them. Levels are relatively short and most let players skip right to or near the boss after dying, which are small, welcome tweaks that keep it from being a slog. Rising to the occasion and besting challenges is generally rewarding and Sifu instills that into its core game design philosophy in a thematically appropriate, artful, and unflinching way. Even though levels and enemy formations do not change from run to run like a roguelike, Sifu is inherently extremely replayable because of the strengths of its deep core fighting system. It’s got a multitude of different attacks that all have unique functions, meaning there is no fluff or overlap in the lean suite of abilities. Every one of them has a place and scenario it excels in.

The game is able to constantly exercise this list of abilities since it is all about knowing when and how to apply them successfully. It’s not formulaic as most fights play out differently depending on who gets knocked out when, what weapons are available, what part of the stage the fight naturally drifts to, what attacks the player currently has, and so on. While other side modes with more variables would be great and expand the game even more, it’s reminiscent of the Batman: Arkham titles with the amount of variability and replayability each brawl can have.

Sifu also controls as smoothly as the Batman: Arkham series, but does so in its own truly unique way. Dodging and attacking are responsive and the many deaths are never because of shoddy controls; dying is simply the result of poor timing or execution on the player’s end. Having to analyze the room and the threats within it is only the first step as engaging with its offensive and defensive tools is crucial in every encounter.

Attacks come in four forms: normal, high, low, and throws. Each calls for a different type of dodge and performing the right one in the moment is always thrilling since enemies will perpetually change up their strings. Well-telegraphed moves mean these constant mixups are still fair while maintaining a bit of unpredictability. Parrying some attacks is also an option and can yield a big reward when properly timed. Utilizing both effectively is vital for survival so neither one is neglected in favor of the other, even if it isn’t always clear what moves can or can’t be parried. Good defense opens up opportunities to unleash devastating offense and Sifu’s aforementioned svelte list of useful attacks is always up for the task. They’re animated well without sacrificing the all-important speed that’s central to its tempo. Moving from guarding to aggressive play is effortless since the forgiving animation canceling allows users to quickly change stances depending on the situation. Even during the protagonist’s golden years, they never lose their step and always mean the game controls wonderfully. However, its camera can sometimes cause players to stumble as it can obscure the action and result in some cheap deaths, a shortcoming that could be remedied by an option to easily reset by clicking in the right stick.

The core group of abilities is only the basics as players can unlock more through special shrines and gaining experience. Aside from adding a healthy bit of progression to the game, they also gradually add more nuance to fights and let players incrementally expand their horizons without being overwhelmed with an intimidating list of commands. In true roguelite fashion, they can even be permanently unlocked across playthroughs if players sink enough points into them. This helps soften the blow of its unforgiving aging system while not trivializing it.

Breaking down all of Sifu’s individual systems paints an appropriately rosy picture of its combat, but the true magic is how it all looks when taken together as one whole. Battles play out elegantly like violent choreographed dances with thick, heavy sound effects that sell each and every blow, all of which take place in dynamic, interactive environments that interestingly bend reality or look as though it has been hand-picked for some big fight scene in a martial arts film.

Its many nods to martial arts cinema are extraordinarily effective as it cinematically introduces mini-bosses with the appropriate amount of gravitas, many of which come with a short, combative dialogue exchange and rising beat that build up to the climactic duel. Players jump from fight to set piece to fight and the lack of downtime between these beats and overall strong presentation of them shows the undeniable benefits of tight pacing and how a litany of disparate parts can harmoniously work together to form one cohesive vision. Sifu is a mechanics-driven game, but its story provides enough context for the action without overstepping its boundaries. On a surface level, it is about exacting revenge on a group of seedy characters. The introduction lays down these simple stakes and fit tropes of the genre so they can be shortcuts that further cut down on unneeded exposition. However, it does contain more depth for those who want to dig into its various pieces of lore. Its disparate parts connect to one another elegantly enough and provide even more background for the overarching story and its cast of antagonists, fleshing them out without distracting from the main attraction.

Sloclap failed with Absolver, but it was all part of the learning process the studio needed in order to get to Sifu. It’s a process that fittingly mirrors the dedication and failure inherent to martial arts and that principle is also realized well within the game. Repeatedly trying the same thing and improving with each defeat is thoughtfully gamified with its unique aging system that pushes its disciples to master its ways and many intricacies. The melee mechanics at the center are also beautifully executed, with fluid controls and an arsenal of useful abilities that result in a consistently engaging combat experience. Sifu knocks its players down with little remorse but also makes getting back up and overcoming obstacles immensely rewarding.

As ComingSoon’s review policy explains, a score of 9 equates to “Excellent.” Entertainment that reaches this level is at the top of its type. The gold standard that every creator aims to reach.

Disclosure: The publisher provided a PlayStation 5 and PlayStation 4 copy for our Sifu review.