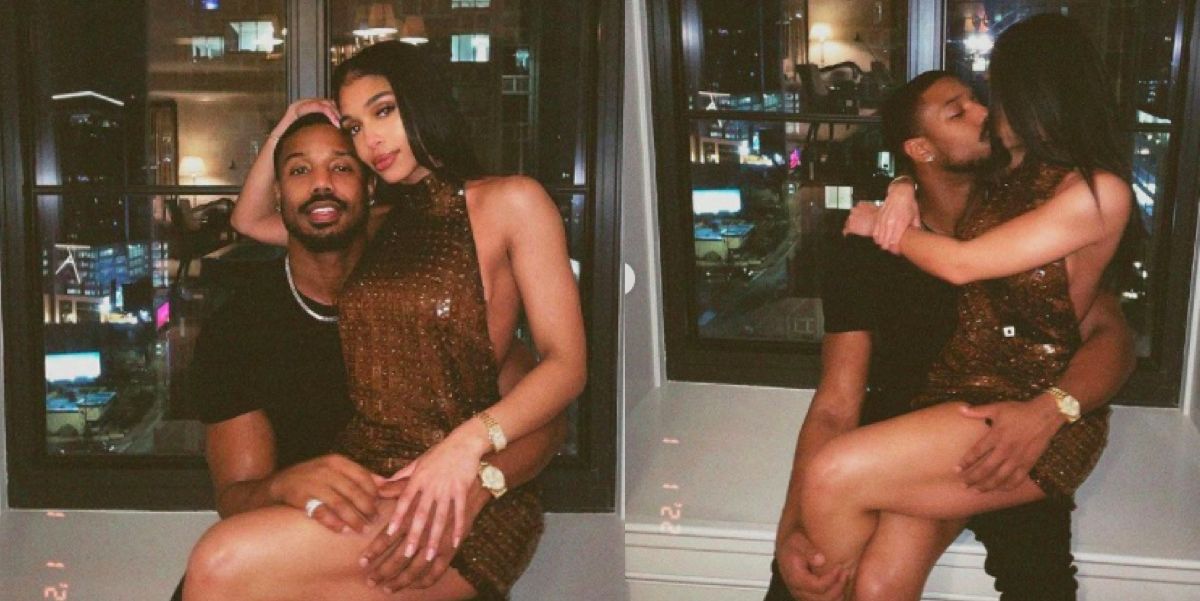 Lori Harvey and Michael B

Michael B. Jordan is no longer single. In January, the 33-year-old actor went Instagram official with model Lori Harvey, 24, about two months after they were first spotted together. He posted two grainy photos of the pair on Instagram, one in which they look into each other’s eyes. Jordan tagged both Harvey and photographer Leo Volcy in the post.

Harvey shared two polaroids to her grid, one where Jordan kisses her on the cheek and one where the couple stands in front of a Christmas tree. She captioned the post with a single brown heart.

On May 1, Harvey posted photos from the at-home premiere of Jordan’s movie Without Remorse. “Prada you baby 🤎 Without Remorse out now on @amazonprimevideo !!!!! ,” she wrote. 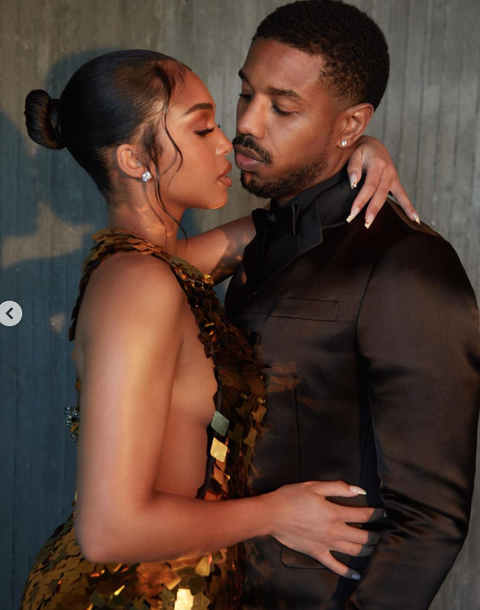 Ahead, key facts to know about the woman who won the heart of People‘s “Sexiest Man Alive” and how she and Jordan kept their romance low-key.

She was first rumored to be with Jordan in November.

The pair’s decision to go Instagram official was a long time coming. Jordan and Harvey were first spotted together just before Thanksgiving. TMZ shared photos of them arriving in her hometown of Atlanta and leaving the airport together. The couple also apparently spent New Year’s Eve together, as The Sun obtained photos of Harvey and Jordan arriving in Salt Lake City. Both reportedly posted photos and videos of their snowboarding trip to Instagram, although they didn’t tag or post about one another.

A source confirmed to People that Jordan and Harvey “have dated for a few months” and “spent all the major holidays together in November and December,” adding, “Lori seems very happy.”

They wanted to keep their romance “private.”

As for the reason that Harvey and Jordan waited months before posting about each other on the ‘gram? “It seems they have wanted to get to know each other in private,” an insider told People. “They have been careful about being photographed together.” The source went on to say that the public nature of Harvey’s previous relationships influenced their decision. “In the past, she quickly posted social media pictures with guys that she was dating,” the source explained. “With Michael, she has tried a different approach.”

She’s been linked to high-profile celebs before.

This isn’t Harvey’s first time dating in the spotlight. She was previously linked to Sean “Diddy” Combs’ son, Justin, according to Us Weekly, as well as rapper Trey Songz. In the fall of 2019, Harvey was rumored to be with Future before parting ways in August 2020. Back in June 2017, she was engaged to Dutch soccer player Memphis Depay, which Steve posted about on Instagram. But the pair reportedly split in 2018.

She’s the stepdaughter of Steve Harvey.

Harvey was born in Memphis, Tennessee and grew up in both Atlanta and Chicago, as reported by Vogue. Her mother, Marjorie, met the Family Feud host in 1990, and they married in 2007, according to Good Housekeeping. (Steve reportedly adopted Lori after marrying her mother.) “My parents did a good job of keeping us out of the spotlight and letting us have a normal childhood so we could be kids and not live life under a microscope,” she told Vogue. “They let us decide if we wanted to be in the industry.”

Harvey and her stepfather’s careers have entwined a few times. She and the rest of the Harvey clan appeared on a 2017 episode of Celebrity Family Feud. The following year, she accepted Steve’s Daytime Emmy for “Outstanding Informative Talk Show” on his behalf. “Happy Father’s Day to the hardest working, funniest, most loving dad out there! I love you so much big guy! @iamsteveharveytv ️ @doseofroses ” she wrote on Instagram last June.

Harvey’s modeling career began at the ripe-old age of three, The Sun reports, and she’s currently signed to both LA Models and Select Models agencies. She’s walked runways for Dolce & Gabbana, starred in a 2018 Pat McGrath Lab beauty campaign, and has also modeled for top designers such as Chanel, Calvin Klein, and more.

“I feel like you don’t see a lot of color in the fashion industry in general. You just don’t. I think I was one of five girls backstage at the show that was African-American,” Harvey told BET of her modeling career. “Of course it was an honor, but it also shows girls that look like me that you can do this too, you can break into this industry and play a huge role in it. It’s very achievable, it’s very possible. So, I think it’s very important to hold open the door for the next person and the next generation of girls that see me and are like, okay, I can do that.”

She previously wanted to be an equestrian.

Prior to modeling, Harvey was an accomplished horseback rider and planned on pursuing the sport professionally. “I wanted to be a professional equestrian,” she told Vogue in 2018. “But I got injured badly a few years ago, so now I only ride leisurely.” According to the outlet, Harvey’s passion for beauty began at age 13, when she began attending events with her mother. “I’d sit, watch, and ask the makeup artist questions,” she explained to Vogue. “Then I’d go in my bathroom and try to recreate those looks.”

Harvey has been known to hang out with several A-listers, including Winnie Harlow, Jordyn Woods, and Teyana Taylor. But perhaps her most high-profile friendship moment arrived in August 2019, when she appeared in Normani’s music video for “Motivation.” Harvey can be spotted around the 1:53 minute mark wearing a white bucket hat and matching crop top. She shared photos from the shoot to Instagram, writing, “You MURDERED this video sis, I’m forever proud of you!!! Everybody go stream and watch ‘Motivation’ now!!! Love you mama @normani“

She is in a more “serious” relationship with Jordan.

In a June interview with Bustle, Harvey revealed she is in a more serious relationship with Jordan compared to her past relationships. It influenced their decision to be more public about it.

“Just as I’ve gotten older and interests change, I think this was something that I just decided to be a little bit more public with because it’s a more serious relationship,” she said, referring to her decision to post pictures of her and Jordan on social media. “I think we’re both very private people naturally. So we just decide, if we take a picture or whatever it is, do you want to post this? Do we not?”

The 24-year-old model post a quick video to her Instagram Story with Jordan, taking a mirror selfie together. The pair were at a Friday night party to ring in the New Year. Harvey pushed social media over the edge with a couple words in tiny font down in the right hand corner of her post. 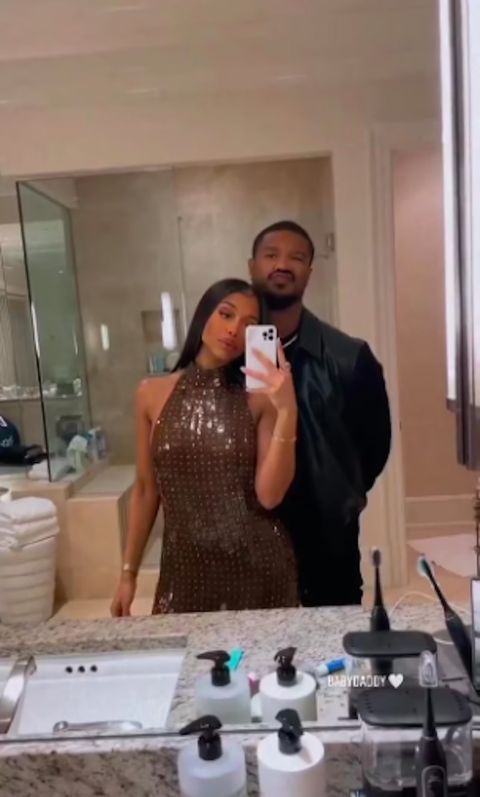 Does this mean Harvey could be pregnant with Jordan’s child? Or was it just a term of affection in the moment? No confirmation either way, though on Sunday the couple share a series of photos of them enjoying the holiday party together.

“Happy New Year,” Harvey wrote in the caption, including emojis of a black heart and two champagne flutes.