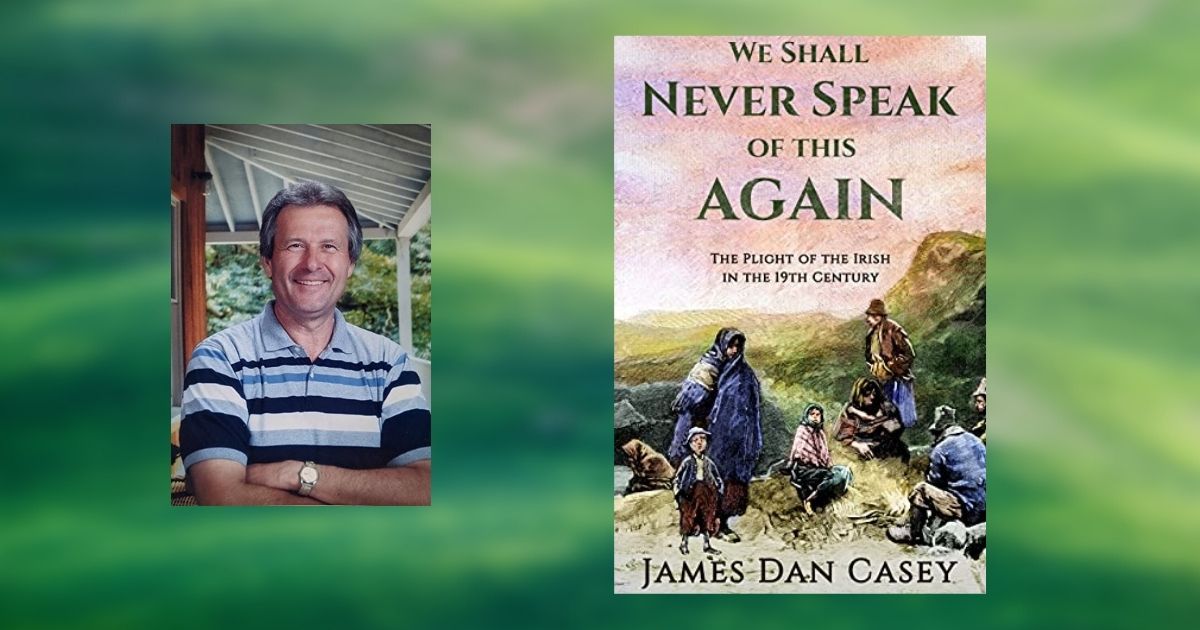 Interview with James Dan Casey, Author of We Shall Never

What’s the story behind the story? What inspired you to write We Shall Never Speak of This Again?

I am 3rd generation Irish and always had an interest in Irish history. My ancestors lived in County Roscommon which experienced the highest population loss in Ireland during the 19th century Great Famine. It is a sad story portraying the religious persecution and human rights violations the Irish experienced at the hands of the English government. There are over 70 million people of Irish descent around the world and I believed that a concise history of the 19th century of Ireland might raise awareness of what their ancestors experienced. I also made mention of my ancestors in various places in the book. I did a great deal of research and published my book in September 2021.

“The Fields of Athenry” is an Irish song telling the story of a young man who was caught stealing food to avoid starvation during the Famine. It is well known in Ireland and played before many of their professional football (soccer) matches.

“Danny Boy” is an Irish song about a mother lamenting her son’s departure for war or emigration.

If you had to write a blurb for the last book you read, what would it say?

This is a tragic story about tyranny and suppression that cost the lives of approximately 4 million Ukrainians. In the early 1930s, Joseph Stalin perpetrated genocide upon the agricultural people of Ukraine. He first stripped the Ukrainians of their land and set up collective farms owned and operated by the state. Former landowners worked the farms. Any kind of dissent led to imprisonment or execution. Stalin wanted the vast amount of grain produced by Ukraine’s fertile “black” soil to feed Russia. Stalin robbed Ukraine of all grain and left the people dying of starvation. In retaliation for dissent, he ordered Communist comrades to enter homes and take all food to include anything on the table already served. In addition, he closed the borders of Ukraine and did not permit any exit from the country. By containing the people, he could keep his crimes secret from the rest of the world. Stalin is high on the list of the greatest tyrants and murderers in the history of the world.

I enjoy reading historical nonfiction and fiction. I’ve always been a student of history and its impact on the world.

My passion is writing nonfiction from all the way back to a short biography I wrote about John F. Kennedy in middle school. I will continue writing nonfiction. I’m considering writing about other downtrodden peoples including the Cherokee Nation of the 19th century or my own book about Ukraine’s genocide of the early 1930s.

Do you have any quirky writing habits?

My only quirky habit is my tendency to write late at night, sometimes even all night through to the morning.

“Do unto others as you would have them do unto you.”

“Keep writing! I couldn’t put your book down.”

Stonehenge was a hunting hotspot long before the monument was

Here Are the Lyrics to Zach Bryan’s ‘Something in the

These Vitamin C Serums Are Basically Mini Facials In A

Journalist, Activist, Feminist: Who Was Ida B

Stonehenge was a hunting hotspot long before the monument was

What AI Can Do for Climate Change, and What Climate

Amazon Accused of Violating US Labour Law After Union Supporters’

WhatsApp for Android Could Soon Get New ‘Search Message’ Shortcut